How can you resist a race named, "Worlds End"?  I couldn't and dragged 2 friends, Michelle and Amanda along for the ride!

After taking some time off in March to rehab my Achilles/heel spur on my right foot I wasn’t so sure World’s End was going to happen for me.  My coach Ann helped me train smart to be prepared and not injured for the long term so I could toe the line on May 21st at the WE 50k.  Think aqua jogging and incline hiking on the treadmill combined with spin, yoga, and graston treatments...... As I finish this report 4 days post-race and 1 recovery run complete, I am feeling surprisingly fantastic – my quads aren’t as crushed as post Hyner in April and my heel feels fine!

Friday
Michelle, Amanda and I did a course preview in January so we had some comfort in knowing half of the course and what we were getting ourselves in to.  Michelle and I drove up Friday afternoon so we could make it to Eaglesmere Inn which was about 15 minutes from the start and grab dinner at a local watering hole that had lots of bear taxidermy.  We met a local couple who are care takers for a section of the trail and gave us lots of "advice" for snakes (don't step on them) and bears (bring a gun).  There was a rare sighting of a black bear in the Wissahickon where we did the majority of our training so we had bears on our mind.

We had time to check in at the start and grab our goodie bags (Bason coffee, cool shirt, and a Worlds End branded buff - hooray for great swag).  We stopped at High Knob overlook for a treat of an amazing view in the sun.  We laid out our clothes, hung out and turned in early with the help of some Calms Forte.  I like Calms Forte because it doesn’t leave me groggy in the morning.

Race Day
We had a 5am wake up call, ate crazy double yolked hard-boiled eggs, and headed to the start to arrive by 6:15am.  We got our bibs, met Amanda, ate pancakes and took a swig of glorious coffee, did about 5 last minute bathroom stops, and then listened to the pre-race talk where we were warned of rattlesnakes, bears, and porcupines. 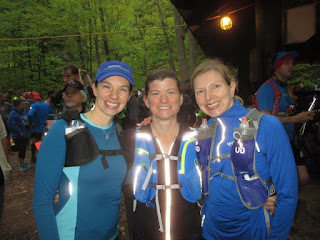 The race start ambiance was super light – lots of smiles and good energy. My plan was to hydrate often, eat after 45 minutes and then every 30 minutes after.  I was going to hike the ups, attack the downs and be reasonable about the flats early on.  Michelle and I are matched well so we stayed together the length of the race.  We met Amanda at AS1 and ran a bit together.

Sometimes the miles can blend together.  It’s easy to piece together a race from aid station to aid station.


·         AS1 BAGPIPES: was right after the bagpipes and had some glorious, glorious watermelon.  It was also my first pit stop – the coffee was worth it though!
·         AS2 POND: was at the lake where we had our 1st pbj of the race.  I forgot how good pbj on white bread is!  There was a really nice family there manning the aid station.  It started raining here and we made a pact to tact it easy on the rocks.
·         AS3 FRUIT: was in the woods and had a great buffet of cut fruit.  My heel had started bothering me so I put my gel heel cups in.  Not sure if that really helped or was a placebo, but I felt better afterwards!
·         AS4 START: was back near the start.  I had chocolate chip cookies here and more pbj.  It felt cool to know we were over half way done!
·         AS5 BACON: was after some big climbs and they had bacon!  This AS was hosted by a running club who isn’t too far from us in Philly.  There was actually a real bathroom here!
·         AS6 PARTY: The aid station hosted by the Pagoda Pacers out of Reading, PA at mile 27 was a blast. We were having a great race, but let’s be honest, 27 miles is a long distance and we were in need of a pick me up.  We heard them hooting and hollering miles away.  When we arrived to a smiling crew who were ready to fill our water bottles, give out hugs, and to Michelle’s caffeine addicted body – a shot of coffee.  She was a seriously new woman after that.  They had to kick us out of there. 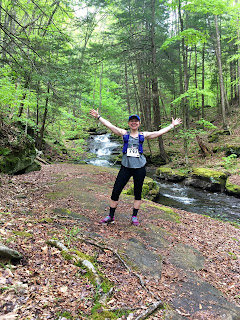 Race Highlights
At around mile 20 we were going downhill and there was a tree smack in the middle of the trail.  I saw the tree.  My brain said, “go right” and my feet said, “huh”?  In slow motion I ran smack into the tree and became a literal tree hugger.  Michelle is usually about 5 steps in my shadow and she yelled, “Coming up behind you!” and we made a little tree hugger sandwich.  We just stood there laughing until we cried for about a minute hugging that tree.

It’s always fun meeting new people and seeing familiar faces from other trail events.  Michelle says these races bring out “friendly Nicole” – which I think is a compliment.  I really do like talking to people at these events (I like people in normal life too)!  Allot of people who don’t run the trails think the terrain and distance is crazy, but after you meet such great, unique, supportive people it starts to become clear that it’s much more than going for a long run.

Things that went well:
.          NUTRITION – I didn’t experience any stomach issues during the race. I couldn’t resist the pancakes at the start and was worried that would haunt me later, but it didn’t so I might have a new pre-race ritual!  I started with tailwind and then switched to Nuun active for hydration and was really good about drinking allot since I had to refill ¾ of my 2 10oz. UD soft pouches at each aid station which were about 5 miles apart.  I had 4 pouches of 33Shake and enjoyed the aid stations (fruit, pbj quarters, and some jelly beans).  I didn’t feel hungry, but was super happy there was a big spread and enjoyed homemade mac n cheese, burgers, and chocolate chip cookies at the finish!

DISPOSITION – My friend Michelle and I are a great match both from a pace and balance of personalities perspective.  She’s faster than me, but runs behind so I keep her steady and she pushes me.  She has a genuine love of running in the mountains which is infectious.  We ran every step of the Hyner 25k together and had a ball.  The time goes by really fast when you are having fun and smiling.  A couple fellow racers asked what we were doing to make it look so easy – we were genuinely having a good time!  We planned vacations (Disney cruise 2017), got psyched up for WV Ragnar trail in August and a maybe a big race (Eastern States 2017?? - yikes), made a list of potential pacers for ES (FYI  Mike W, Megan P, Amanda, Audrey, Mike K, Jenn B, Shari), decided we will run Hyner 25k in 2017 and destroy our 2016 time which will require we take Monday off from work, made lodging plans for our tri in June, discussed parenting strategies to make sure our kids turn out ok, and gave ourselves lots of excellent nicknames – my hands down favorite being ‘Ultra Mother F*&%ers of the Forrest’.

PERFORMANCE My goal was to have fun and finish, and as a stretch wanted to run hard and do well finishing under 9. It's a tricky balance between being smart in the unknown and testing limits.  This race was a test of how to problem solve and see how my body would react when I hit miles I hadn't experienced before.  I felt stronger mentally and physically than I expected and am ready to try and go faster and longer.
Lessons for next time
1.       CLOTHES - Dress less!  I didn't need  along sleeve to start and shorts instead of capris would have been the bomb.  Need to look at my underwear situation since Michelle saw me pick a wedgie about 500 times.  I'm so sick of thinking about stupid underwear and will consider all suggestions.  I had 2 blisters on the outside of my big toes.  They weren't too bad at 50k, but I imagine at any more mileage they would've become gnarly.


2.       NUTRITION - more tailwind for the next race since this really worked for me.  Maybe a better/more thought out pre-race meal the night before.

4.    PERFORMANCE - I think I can push harder now that I know what I can handle.  I have room to improve hiking uphill and being more aggressive on the downhills - especially the more steep/technical downhill.
Posted by Nicole W at 11:11 PM

So so so proud of you!!! Well done - not only did you have an amazing race but you have an even more amazing attitude and perspective on running and everything! YOU ROCK!!!

I discovered your blog through the race reports for WEU and I was wondering if you have a running group around Philadelphia that trains fro ultras! I am outside the city near North Wales and I am having a hard time finding trail runners!

Congratulations on all your successes and happy trails!